skip to main | skip to sidebar

How Ethanol Fuels The Food Crisis ? 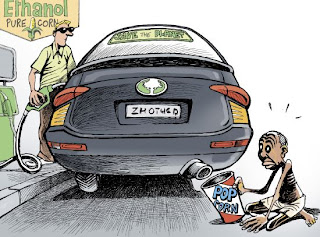 This cartoon shows a man who is filling up in a service station. We can guess thanks to the advert above him that he's acting for the planet using ethanol. He seems ecological on account of the stickers on his car : « Save The Planet » and a drawing of a green tree. All seems normal until we see the other character in the foreground. An African man is knelt next to the exhaust pipe. He may be poor owing to his thinness – we see his ribs – and the fact that he's only wearing a dirty pair of shorts. Furthermore, he's barefoot. What catches our eyes is a bucket of pop corn that he's holding. This element makes us think that he 's expecting food to fall from the pipe. He's very surprised to discover that nothing comes, as reveals his expression and his creased forehead. Throughout this cartoon, the author makes us understand that our wish to protect the planet using bio fuels makes us forget and neglect the health of the inhabitants of the South countries. This drawing shows the contrast between the North and the South population. Indeed, the black man represents the South whereas the other character is the representation of the North. Meanwhile the poor population is dying of hunger, the richest are using food to fuel their car. However, this corn could prevent undernutrition.
(Laila, Pauline, Maxime, Margaux, Christophe). 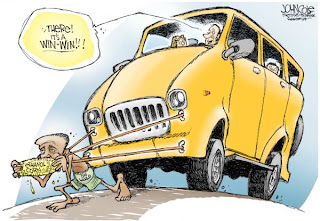 What first strikes me is the imposing yellow car. Inside, there are three persons: the father, the mother and their son. A black man is eating corn and in the same time he's pulling the car with cords. He hasn't shoes and he looks tired. He represents the poorness because he's tiny unlike the family in the big car who looks happy and who is bigger than him. It represents the richness. The driver is saying: « There! It's a win-win!!! » The first “win” is because the man can drive to save oil and the second “win” is for the black man who can eat. (Auriane, Thomas). 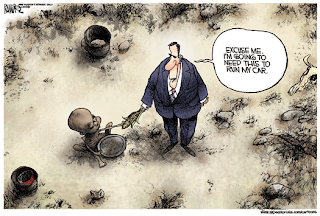 The scene takes place somewhere in Africa. There are two people: the first is rich and the other is poor. The poor person is a young child sitting on the ground. This one is very scrawny and is starving to death. He seems naked and he has just a plate in his hand. We think that he illustrates the South. There is also another person, who is rich and fat. He contrasts in this landscape because it's a period of drought. He's wearing a blue suit, a white shirt and a tie that proves us that he has lot of money. The big man is maybe an illustration of the North. The picture shows us the high unfairness and inequity between North and South. Moreover, the South's landscape is unbearable because the land is dry and there aren’t trees or plants. (Adélaïde, Laura). 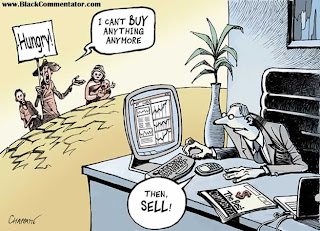 In the background, we can see a man, his wife and their two children. They are the small farmers who produce raw materials for the northern countries. The baby is crying. The father is shouting that he can't buy anything anymore. The life's conditions are difficult. In the foreground, we can see a rich man who wears a suit. He is sitting in a big chair behind a desk We notice two computers, a phone and a financial magazine there. We can guess that he is a trader who looks after his stocks and doesn't share them with hungry people. They ask him for help and he doesn't care about them. The southern family is hungry and doesn't know how to produce more. The trader should give money to them so that they could use irrigation and chemicals products to be self-sufficient. (Fanny, Violette, Linus) 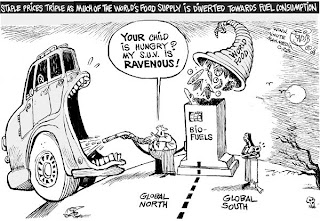 This document is divided into two parts: the left part of the cartoon represents the global north population, and the right one represents the global south population. At first, we'll speak about the cartoonist vision of the North. The car looks like a carnivorous since it has a big mouth and teeth. Next to the car, we can see a big and fat man who is feeding his vehicle with world food represented by a cornucopia, which transforms aliments in bio-fuels. On the opposite side, there are a skeletal woman with her baby who is crying because of the hunger. Thanks to Bio-fuels cars pollute less, but the food problem in the world isn't resolved. (Emma, Alex, Adèle, Amandine) 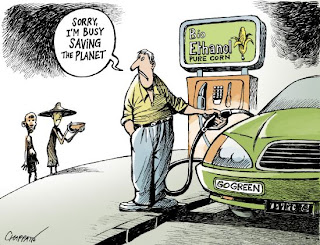 This document is a color-cartoon, drawn by Chappatte. The date of the publication is unknown. The scene takes place in a gas station. We can divide the document into two parts, the rich man on the right and the starving people on the left. It focuses on Bio Ethanol, and the problem of this sustainable solution. What first strikes me is the relaxed and rich-looking man who's serving himself with biological ethanol (made with corn). He's wearing a green shirt with a blue trouser, besides he is a white-skinned man and is a bit plump. He has got a big green car and on his license plate we can see a sticker where is written: “GO GREEN”. The man is saying:”Sorry, I'm busy saving the planet” to an Asian and an African. One of them is holding an empty bowl. First of all, the man's corpulence shows us that he's got a good way of living and enough money to buy Bio Ethanol in contrary to the two poor characters on the left, which don't have any money at all and nothing to eat. In the rich countries, the population should reduce the inequality and help the poor countries to develop the food production and to be self-sufficient. The cartoonist draws our attention to the fact that rich people are busy about environment instead of feeding the poor part of the world. To put it in a nutshell, it's good to save the planet however we shouldn't forget the people needing something to eat. If we begin to use food instead of oil, consequently the number of people who are in sub-nutrition will increase. This document highlights inequalities between North and South countries in the world. (Clara, Anna, Clémentine, Chloé)